Is you are starting to look for walling stone you will probably have come across many different terms which may seem alien to you. So here is a quick briefing about the terminology of walling stone. 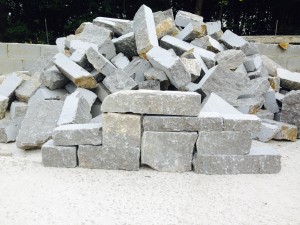 “Cropped” is the term we use to describe a process where a rough stone is taken and put through a “Cropper” which is essentially a large guillotine made for stone. This splits the stone and creates a Flat face which we then use as the visible side of the stone when building with. An example of this is our cropped limestone walling stone.

Facing a stone is the term used for the process after the stone has been cropped. The stone mason goes round the edges with a hammer and knocks of the crisp edges created by the cropper. Which tidies up the appearance of the stone. This is a vital part of building in stone. Most walling stone is sold Cropped(not “cropped and faced”), meaning it needs “facing”. Where a builder has been employed that has little experience of working with natural stone and doesn’t know they have to face it can leave to buildings having a very poor finish.

The bed width is the distance from the front of the stone to the back. Essentially the depth of the wall.

This is the term used for when the stones bed is too deep and the builder has to chisel the back of the stone to get the bed size right. This is usually when a house wall is built with only one skin of block work and then a cavity between that and the stone wall.

The “course” is the term used to describe the height of each of the stones within a wall relative to each other. For example A coursed wall would contain stones with all the same height. 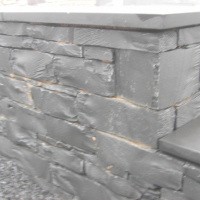 A random coursed wall is where the stones have a variety of heights. So the builder makes a pattern up from the stone available

A “Jumper” is the word used to describe a large stone placed in a random coursed wall which “Jumps” two or more courses to give a new level to the course.

A coursed wall is one which contains all the same heights of stone. The length can vary, but height of each stone remains constant throughout the wall. For example our Cropped and coursed Limestone building stone.

Roughly coursed walling stone is where each “individual course” of the wall remains the same height. But throughout the wall the each course can vary in height.

A Coin is when the building has special corner stones made, these are usually large stones cut very neatly in the same of differing materials. For example you often see Sandstone Coins on a house with cropped limestone walling stone as it is much easier to create perfect shapes in sandstone.

Dry stone walling is the term used for when mortar isn’t used to create the joins between the stones. The wall is effectively dry and relies upon the skilled builder placing the stones in a manor where the weight of the stones supports the wall itself.

Mortar is the name commonly used to describe the “glue” between the Stones in a wall. It is usually made up of a mixture of sand, cement and water. Sometimes referred to as “Gobbo”

A Traditional mixture of lime, sand and water. Most buildings now use cement mortar, but where traditions are to be upheld such as in listed buildings lime mortar is still used.

Free Shipping to the Mainland UK